Extract from the Newark Advertiser June 1893

Before newspapers adopted the halftone process for printing photographs they used to create line drawings based on photographs. Here we can see the original photograph used as inspiration for the line drawing that appeared in the Newark Advertiser.

One of the most disastrous fires that has occurred in this district for years past took place on Sunday morning at Southwell, when the large flour mill belonging to Mr. E. Caudwell was completely gutted, nothing but the exterior walls of the building itself remain. …The illustration we give of the scene of the fire is sketched from admirable photos taken of the mill during the outbreak, by Mr. A. J. Loughton, Southwell, and we have to acknowledge our indebtedness to him for placing the prints at our service. The sketch shows the burning building, of which only the walls remain, and the warehouses to the left, which have been saved from destruction. The photo was taken while the work of salvage was in progress, and while the firemen were pouring water upon the flames.

The text and line drawing was published in the Newark Advertiser the following week. 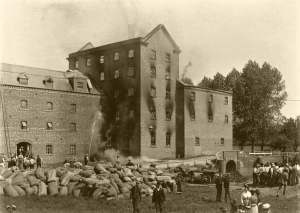 The fire, which was the second in the mill's history, started shortly before 07:45 on Sunday 18th June 1893 and was first seen by a man named Larrington who lived near the mill. Today the mill still stands by the river Greet and has been converted into flats.

To the right the original photograph taken by Alfred.